All of the Latest News You Need To Know | TSI

We are proud to announce that Transport and Telecommunication Institute Dr., Prof. Irina Kuzmina-Merlino got the Best Paper Award in the 9th International Conference on Leadership, Technology, Innovation, and Business Management (ICLTIBM-2019) which was held at Beykent University, Istanbul, Turkey, December 12-13, 2019. Dr., Prof. Irina Kuzmina-Merlino presented her paper “Managers’ Competencies in Digital Era”.

Transport and Telecommunication Institute from the bottom of the heart congratulates Evelīna Budiloviča on the successful defense of her dissertation for the degree of Doctor of Engineering Sciences and wishes her further professional growth, new success and the achievement of your goals!

From October 16-19, in the Transport and Telecommunication Institute (TSI) was held an annual international scientific conference “Reliability and Statistics in Transportation and Communication RelStat-2019”, this year's main topics were automated and connected vehicles - autonomous vehicles including unmanned vehicles, public transport and drones.

The RelStat-2019 conference, has been organized every autumn by the Transport and Telecommunication Institute (TSI), and this year the main speakers became the leading researchers in the field of autonomous transport from Germany, Netherlands and Latvia, as well as leading experts in artificial intelligence (AI) and robotics from France.

At the RelStat'19 Plenary sessions, alongside well-known Western European scientists spoke Dr. Kaspars Ozols, Deputy Director of Development, Latvian Institute of Electronics and Computer Science (EDI), who spoked about how EDI, the creator of Latvia's first unmanned car, is developing various technological aspects for such vehicles.

Dr. Constantinos Antoniou, a well-known professor at the Technical University of Munich (Germany), in his report “Paradigm changes in mobility: What do we know and how is the future looking like?” shared his opinion about obstructions of applying unmanned vehicles in everyday life and when that could happen.

Bert van Wee, professor in Transport Policy at the Technical University of Delft (Netherlands), also dispelled some myths about autonomous vehicles (ATS). Including, how they would help to solve traffic jam, actually the reduction forecast is less than 10%.

Deputy Director of the Robotics Center, Professor at the Ecole Nationale Superieure des Mines de Paris (France) Dr. Fabien Moutarde, expressed an opinion that the actual unmanned car - with level 5 automation, which does not require any human connection at any stage of the road - will never appear.

Another main topic of the conference was focused on the problem of clustering in data science and was presented by Dr. Eric Gaussier, Director of the Multidisciplinary Institute in Artificial Intelligence in Grenoble, Professor of Computer Science at University Grenoble AlpsDirector of the LIG Computer Science Laboratory (France). Dr. Gaussier talked about what difficulties scientists face, trying to train Artificial Intelligence (AI) to sort large volumes of text documents.

This year RelStat-2019 also became part of the Seminar within the framework of the European project "COST Action CA16222: Wider Impacts and Scenario Evaluation of Autonomous and Connected Transport" were TSI professor Irina Jackiva participates in the committee.

The record of the Conference can be watched on the TSIRiga YouTube channel.

TSI Vice-Rector for Science and Development Affairs Prof. Irina Yatskiv has started her work as Vice-President of the Board of The European Conference of Transport Research Institutes (ECTRI). 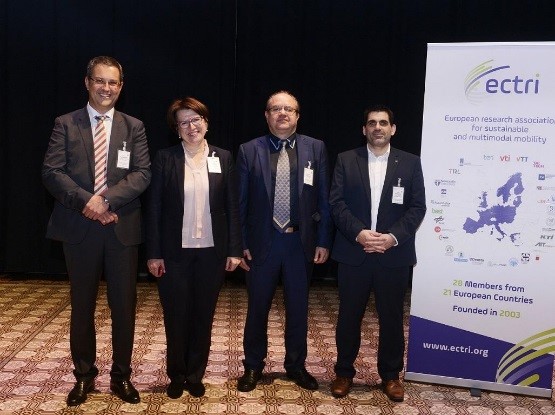 TSI is pleased to share news and congratulate the Institute’s Vice-Rector for Science and Development Affairs Prof. Irina Yatskiv with becoming Vice-President of the Board of The European Conference of Transport Research Institutes (ECTRI) on 27 January, 2019.

The European Conference of Transport Research Institutes (ECTRI) is an international non-profit association that was founded in April 2003 as the first attempt to unite the forces of the foremost multimodal transport research centers across Europe and to thereby promote the excellence of European transport research. Today, the organization includes 28 major transport research institutes and universities from 21 European countries. Together, they account for more than 4,000 European scientific and research staff in the field of transport.

TSI takes an active role in building the transport research community and is looking forward for new collaborative opportunities coming along with the appointment of Prof. Irina Yatskiv to her new position.

Riga, Latvia, Nov 2018 – Transport and Telecommunication Institute (TTI) proudly announces that as of Nov. 29, 2018 we expanded our ISO 9001:2015 Quality Management certification to the field of research & development.

International Organization for Standardization (ISO) 9001:2015 standard is the most updated of its kind and focuses on quality management systems and performance. A successful certification is tangible proof for the TTI effective application of a comprehensive quality control system in its research & development activities. As put by the standard, it leads to “ability to consistently provide products and services that meet customer and applicable statutory and regulatory requirements”.

The Institute appreciates efforts of all involved parties and individuals who made the certification happen, especially LRTDEA - TÜV Rheinland Grupa for high professionalism in performing the external audit.

The TTI understands the importance of the quality management standard approval and will continue build on our research & development quality management to ensure continuous satisfaction of our partners and clients in academia, the private sector and beyond.

In November, a new European Social Fund (ESF) project “Strengthening academic staff of Transport and Telecommunication Institute capacity in strategic specialisation areas” started at TSI. The project is  funded by the European Union (85%) and the Latvian state (15%).

The main goals of this project are:

The project involves the participation of academic and administrative staff of all three faculties. The project is scheduled for a period of 24 months until October 30, 2020.

Workshops on the organization of the project will be held soon.

Andrejs Zvaigzne successfully defended the thesis «Decision making at the early stages of the design of a multifunctional special purpose ship with modularly oriented architecture» at the public session of the Promotion Council of the Transport and Telecommunication Institute on October 06, 2017.

Reliability and Statistics in Transportation and Communication (RelStat`14).
15-18 OCTOBER 2014

Intermodality and co-modality: tools for sustainability, Interview with Dora Ramazzotti. In a frame of POLITE project

Region-wide ITS solutions for multimodality and multiservice smart ticketing, Interview with Monica Giannini. In a frame of POLITE project

Simon Beasley, RBC, talks about the benefits of interoperability. In a frame of POLITE project

Stay informed on our latest news!